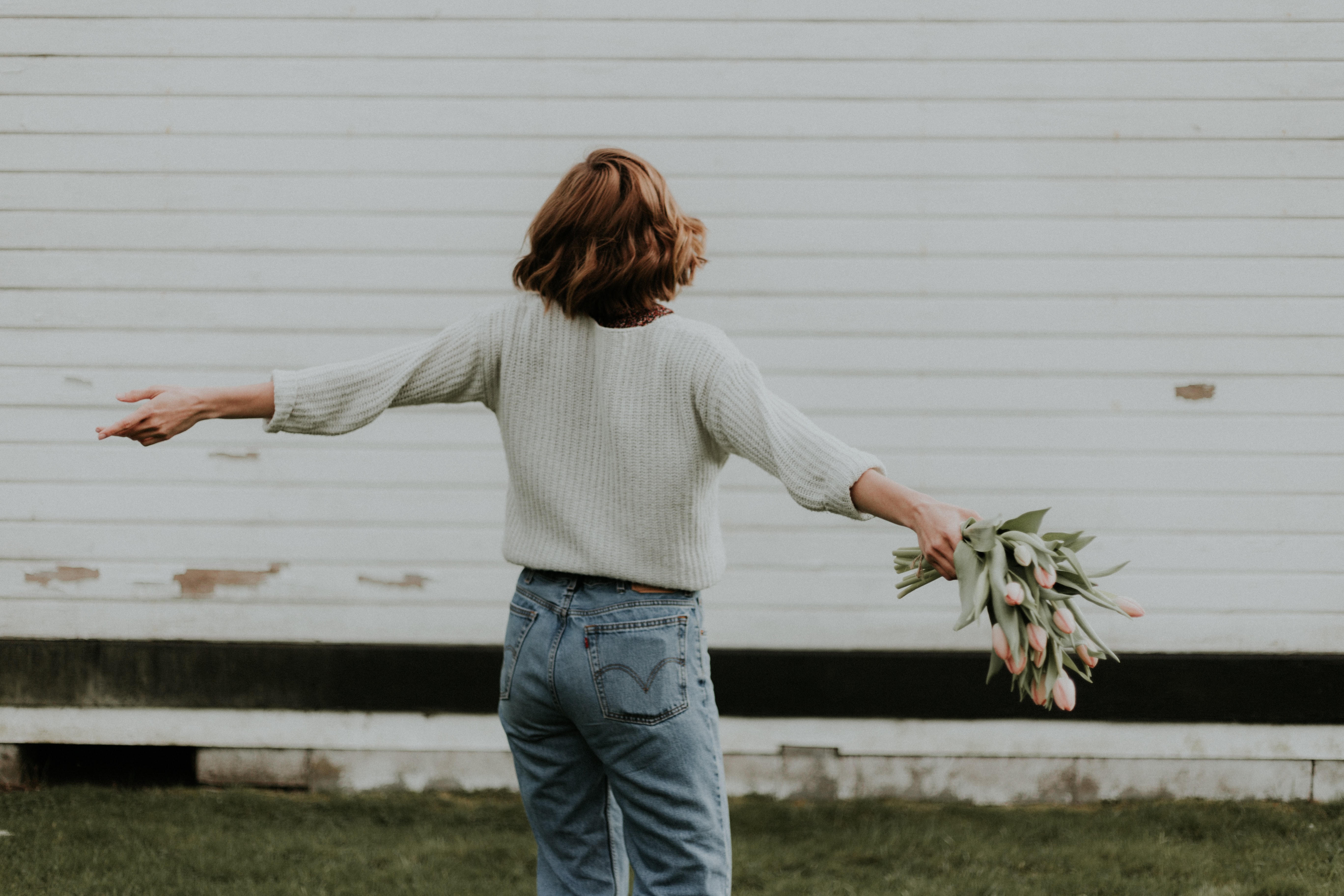 Last month I had the opportunity to attend a women’s event held at one of the local churches in my area called the SHE Gathering. Shayla, the speaker of the night, was absolutely lovely and perfectly conveyed a message I think a lot of us need to hear:

We choose the story that we live.

Maybe you’ve carried some pain and hurt, or maybe you’re trying to carry the good ‘ole days with you and you’ve been trying to relive them. We all have these things that we’ve carried with us. Today, right now at this moment, the last second, that’s history. As of today, we choose the story that we write. We choose what we live, believe, speak, and the actions that we take.

The rest of today is unwritten, what is the story that we’re going to choose to write?

The scripture of the night was Ruth 1:1-18 and it revolves around Ruth, Orpah, and Naomi.

Here is a little backstory:

Naomi, her husband Elimelech, and her two sons were very wealthy, owned a lot of land, and were very well-off. There was a time when a severe famine came into the land so Naomi and Elimelech chose to move their family from Isreal to Moab.

The culture in Moab was polytheistic meaning they believed in many gods, so it was very countercultural to how the family had grown up and to what they were raised in. Soon after entering the new country, Elimelech died, leaving Naomi with her two sons.

Although in the Jewish culture, at the time, it was frowned upon to intermarry with different religions, races, etc., Naomi’s two sons married Moabite women, Ruth, and her sister Orpah. The family lived in Moab for 10 years, during which both of Naomi’s sons died as well, leaving Naomi without her husband or her two sons.

After the death of her sons, Naomi decided she was going to go back to her homeland, Isreal. She told her daughters-in-law that she was going to release them of their commitment (what was customary in that period of time was that Ruth and Orpah would’ve had to wait for Naomi to re-marry, have more kids, and marry those kids). She told them to be with their family in the country/culture that they knew, and that they were comfortable with.

Maybe, what happens in this moment where Ruth and Orpah are deciding whether they are going to stick with what they know or go with Naomi, is the moment you’re sitting in right now, asking yourself:

How do we do this?

How do we begin writing a new chapter?

Orpah went back to what she knew and was comfortable with and Ruth made the choice to stay with Naomi, she clung to her. Ruth made a decision to live differently. Our first step to writing the story that we’ve been designed to write is that we need to make a decision inside.

We have the ability to decide inside that we don’t want to live the story that has been continually written for us, that we can choose to live differently. We all want the promise of something better. We want to see what we dream about become a reality, but one of the things that we have to realize is this:

If you think about it, up until now all of the decisions that you’ve made have led you to the place that you’re in. The choices of relationships, jobs, or even how you spend your money.

If we want to begin to write a different story; something amazing that God has for our life, we have to have the understanding that our decisions determine what happens next.

When you begin to make the different decisions when you decide inside that “This is no longer the story I’m writing I will write a new story,” there will be opposition, difficulty, challenges, and people who make you second guess yourself.

You’ve probably heard the story of David and Goliath, but did you know how closely related that story is to the one of Ruth and Orpah?

Again, Orpah chose to stay in what was comfortable and in the country and culture that she had always known going on to be the mother of Goliath…

Ruth chose to leave and live differently and she was the great-grandmother of King David.

One choice (Orpah’s) produced a defeated giant and the other choice (Ruth’s) produced a victorious king. Your choices and your decisions matter, they have the power to change the course of your life. Yes, there will be opposition, but it’s time to choose courage.

As soon as you decide to live differently the enemy is going to come with temptation, just as Ruth faced when Naomi suggested she stay back with her sister.

We repeat what we don’t repair

If we don’t repair our thinking or the issues we have in our hearts, we will continue to repeat the same chapter over and over again.

We need to change the narrative and I’m here to tell you: you are worthy, you are able, you are capable, God has designed you with a purpose and a plan to be able to overcome whatever it is that you’re walking through at this moment. You have the strength, you have the courage, you have the capacity, you have the education, the knowledge, you have the ability to do it.

When you make the decision to live differently, you need to daily remind yourself that you are capable and that God is on your side; He wants you to win. You also need people in your life that surround you and remind you of that.

Joyce Meyer said, “There are two kinds of pain, the pain of change or pain of remaining the same.”

Which pain do we choose? The pain of choosing to live differently and closing the last chapter, or the pain of reliving that chapter over and over again? We have to begin to change the narrative in our heads.

Take a second to think about the way that novels are written; without conflict you might as well be writing about your favorite character eating nachos or watching paint dry, novels without the conflict are boring to read.

Conflict produces something in our lives and that thing up until this point, that challenge you’ve been facing, that mistake that you’ve made, that failure that you’ve had, that sin that’s been in your life, those decisions that you’ve continued to make… It is not wasted, God will use it as part of your story because you don’t know that there is something that somebody else has walked through in their past and they need your story of saying, “I stood up out of that situation and I walked out of it differently because I realized that I had a different story to tell and you could do that too.”

That conflict that we’ve faced has power to bring freedom not only to us but to others as well.

In the passage above, Ruth is stepping into a new story, not the story of her past. She stepped into her future and began to declare that over her life. Some of us need to do this:

We need to begin to look at our future differently and proclaim that we are not the sum of our past, but we are stepping forward. We are writing a new story.

There is power in allowing God to write your story. You do not have to repeat the same chapter over and over again. God has a new story to write in your life and in your mind, giving you the ability to not always question who you are but for you to be able to walk in confidence.

We have to be able to redefine our future and ask God what He has for us because here is what I know:

If you don’t have faith for the future, then you won’t have any power in the present

If you don’t have faith in your future, if you don’t know what you’re walking towards, you will be powerless at this moment. You will give in every single time. If we don’t have faith to believe that our story can be different, then we will end up choosing what is comfortable again and again.

We’ve got to have faith for our future so that we can stand in strength and in power in those moments of decision when we’re faced with “Do I go back to that chapter or do I continue writing my story and my new chapter?”

It’s time to close the last chapter and allow God to write the next part of our story.