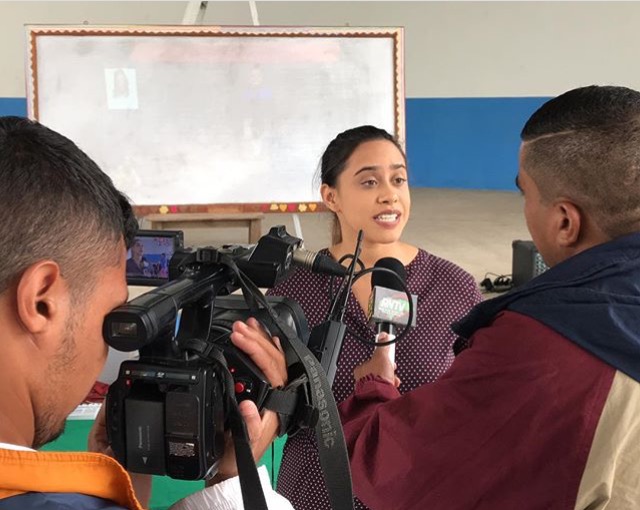 I had the pleasure of sitting down with Karis Williams, founder of Sparks of Grace, we met a local “health spot” where I got to try my first acai bowl! Karis is a twenty-six year old with a passion to bring to light to the issue of Human Trafficking. She started Sparks of Graces as a social media platform that would bring awareness and create partnerships between organizations and churches to end modern day slavery. Her life verse is Micah 6:8, “Do justice , love mercy and walk humbly with your God.”

During our long morning breakfast, Karis shared how God called her to combat human trafficking when she was 15 years old, at that time she did not know what that meant or what that would look like, but now looking back it is amazing to see how God used her time serving in the military, her past work with sexual assault and trafficked victims and her educational track  lead her to be where she is at now.

Tell us a little bit about what you have been doing recently to combat trafficking?

In October Karis had the opportunity to go on a trip to Honduras as a consultant and speaker. She conducted presentations for government officials, university students, and churches on Human Trafficking Awareness specific to the region.

When asking Karis how she ended up on this trip she told me that the trip was a “ God-cidence”  her definition of a coincidence ordained by God.  She stated she was at an event where local anti-trafficking advocates come together and Tania (the founder of a nonprofit Mavuno project) expressed a need for someone who was bilingual, with extensive research in human trafficking, and knowledge of Central America to be the Main Presenter for her trip to Honduras. Karis happened to fit all of the above criteria. She wasn’t entirely sold because she needed to still renew her passport and because it would mean going on a trip with people and organization she had ever worked with before.  Nevertheless, Karis and her husband began praying whether or not they should go and guess what arrived four week earlier than expected? The passport! “Well, okay, let’s see what my job says. It usually takes two weeks to process requests.” An hour later she had been given her time off to be able to go to Honduras.

Karis shared that she was nervous about speaking as the subject matter expert on this trip but knew that this was something God had been preparing her for.

Did you have a different idea or vision of what it would be like versus what actually occurred?

“It wasn’t a surprise, this is what I expected. I have been studying and research the conditions in Honduras and the policies and laws in places for about two years”. During her time in Honduras, Karis visited a region where domestic sexual abuse is so prevalent that young girls are educated to expect sexual violence. They had to tell mothers and daughters that certain things are not acceptable and should not be allowed.

“Over there you’re taught not to report, not to say anything.  My last presentation was to a group of university students and one girl came up and when I started praying over her I just started hearing sobs of people who were just so hurt”. She described how when she touched this girl’s shoulder she began to feel the anger, hurt, and brokenness that this girl was experiencing and how powerful that moment was.

Karis also faced food poisoning the day before a really big day presenting before the school board and politicians. News reporters were showing up and she was throwing up in between interviews. “I can never say God isn’t true to His word because I saw it all happen despite my sickness, moodiness, and schedule changes”.

Share one of your most treasured memories from your time spent out of the States.

“The shoes”. Karis shared with me that their group had brought new shoes to distribute at an event they were attending. There was a little boy that had holes in his shoes and really wanted to get a new pair from them but thought they had run out. When he discovered that there were still shoes to give out he could not wait until the end of the presentation. Karis couldn’t take it either so she gave him his new shoes early. The little boy was so overjoyed at the gift!

“The reason this was my favorite part was that it was so different than the “main” reason as to why I went but it was still an opportunity to serve. One thing I have learned is that just because human trafficking is my thing does not mean that is the only things I am supposed to do. As a Christian, I still want to share the gospel, love and provide this is the truest testament of me being a disciple of Christ.”

What is one of your favorite parts about the calling that God gave you?

“He’s called me to something bigger than me and to be confident even if it’s something that other people are already doing. As more people become aware of the issue the more people want to be do something about that and I love that. But it’s important to know that YOU have your own part in doing something about it.  We all have our own skills, gift, and talents that can be used – for me sometimes it research policies, sometimes it speaking, but most importantly I have learned to encourage others to use their skills to combat trafficking, it all about being behind the mission.”

What do you like to do in your spare time?

“I am still your average girl; I like to go to the gym, cuddle with my dog, and get mani-pedis. I believe that as a woman you can still fulfill your calling while wearing lipstick and heels which is why I love CWL mission statement “Fashion and Faith”.”

What advice would you give to someone who thinks God is calling them to actively fight Human Trafficking? How should they go about it?

“What are your gifts and skills, and how can use them?”

“Sometimes I meet women/men who want to do what someone else has done but that’s not what God has for us. Know what it is that you’re best at instead of throwing yourself in there or you’ll be overburdened.” She also shared that when she first got into her area of human trafficking she wanted to do human trafficking investigations. After working face-to-face, talking with victims I realized that I wanted to be able to do more which is when I became more interested in research and policy work. Fifteen-year-old me would never have imagined that, but while working on my Masters I realized that I actually like conducting research and finding a solution to the issue as a whole and God wanted to use that.”

How can our readers get involved in supporting this mission?

Places to get involved in South Florida:

Finding a place to get plugged in near you as simple as a Google search!

Karis also shared that there is a panel event coming up that she will be hosting on January 19, 2018, at Calvary Chapel Plantation from 6-9PM.

Crowned Beauty, if God is calling you to something bigger than yourself, just take these words of encouragement. “God matches up every circumstance to line you up with what He’s called you to.”