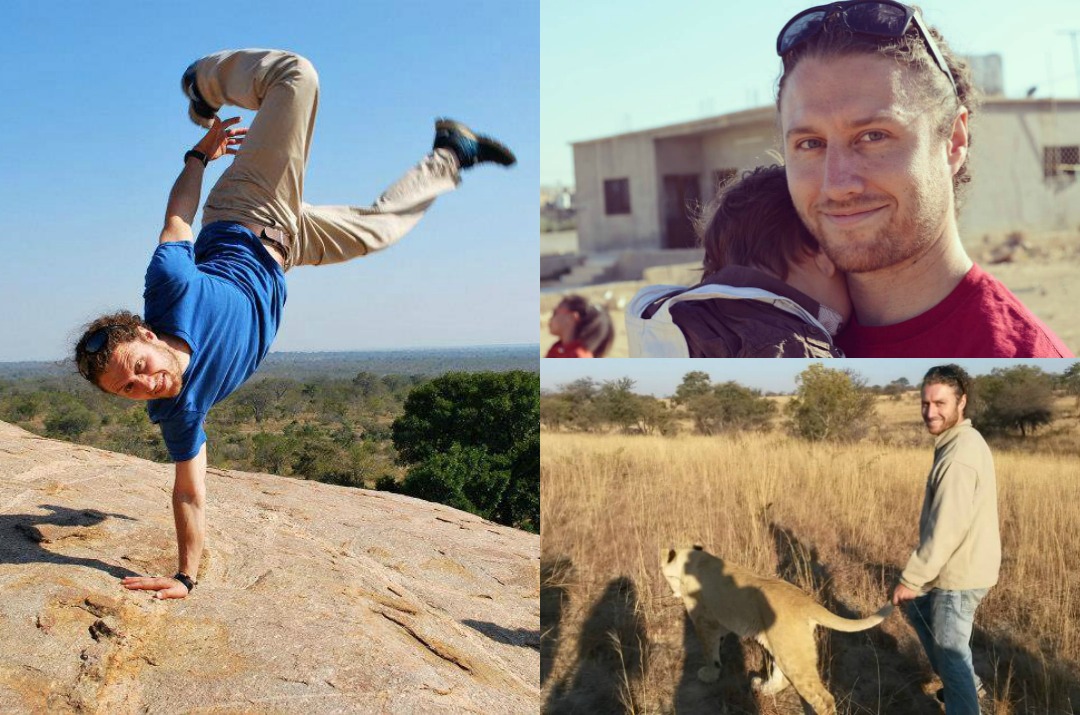 My name is Daniel Bush, I’m the youngest of 3 brothers, and we’re all 2 and a half years apart. I was born in Minnesota, grew up in Florida, lived in Georgia for 10 years, and now live in Tennessee! My parents live back in Georgia near my brothers family, and my other brother has a family down in South Florida. After high school, I went to 3 different Universities, trying to figure out what I wanted to do with my life, changing degrees continually. Eventually, I came out with lots of credits, yet no degree. It wasn’t until about 6 years ago I began to realize missions is what I was meant to do.

2. Tell us a little bit about what you have been doing.

For the past 6 years, I’ve been doing all sorts of missions related things. In 2013 I attended an intensive missionary training school, called Harvest School, in Mozambique for 3 months. After graduation, some of the students went to Cambodia for our outreach. It was there my heart broke for the human trafficking industry. I went back to Mozambique 4 more times to help staff the same school. I led teams to different countries afterward and even moved to Jordan for a couple months. Last year, the Lord told me to stay back from traveling and put my roots down somewhere, which ended up to be Nashville. While being here, it’s been this sweet time of being hidden away with Him. I began to realize what He’s placed inside of me, and for what purpose He has. This year, He had me traveling again. I linked up with a non-profit here called Given ministries. Between them, and previous connections I had, I took a 5-week trip earlier this year. I joined an Iris team in Thailand and Cambodia, where we partnered with local organizations that either fight human trafficking, do prevention, or just love on those involved. I then went to Northern Ireland with Given Ministries, where we have a play therapist, who works with kids from hard backgrounds. 3. How did you come to the realization that this was what God was calling you to?

Back in 2012, I was watching a movie that involved child soldiers. I found myself unable to keep the tears back. Even after, while I was working, I would have to leave because these kids faces wouldn’t leave my mind. It was then, the Lord spoke to me. After such a long, hard journey of figuring out what my purpose was, and what I was supposed to do with my life, I felt for the first time I had a hope and a future. These kids have never left my mind, and I sit up at night thinking about them and weeping for them.

4. What kind of emotions did you experience during your time on this journey?

The list is many! Especially in places where you see the injustice happening within arm’s length. Often I’ve felt this righteous anger, but it’s coupled with compassion and empathy as well. My heart breaks for these kids, and even now as I think of them, tears flood back. I can’t imagine what they go through, and no kid should have to. At the same time, a couple years ago, the Lord started to show me His heart for the Johns and Pimps. They are hurting on the inside, and so in need of the love of Christ as well. That perspective has shifted everything for me. My desire is mainly for the kids, but if these people taking advantage of them are changed, that could be huge.

5. Did you have a different idea or vision of what it would be like versus what actually occurred?

I don’t think I was fully prepared for what I would see and the stories I would hear. To experience it is so different than hearing about in another country, in the comfort of first world life. The kids and their situations are real. Some of these kids really do get taken advantage of, and sleep on the streets, and have no family protection, and are sold by family members, and have no stability or safety or childhood. They have faces and names and personalities and humor and smiles. That’s what really struck me, the reality and weight of it all. But being able to be there and make an impact and give these kids a safe place to play and be kids and have a bit of joy, that’s what made all the difference.

6. Share one of your most treasured memories from your time spent out of the States.

The one that comes to mind is from my time in Jordan. We would have kids club on Saturdays where kids from all around the area would come to play games, sing songs, hear stories and just have space to be kids. Most of them were Syrian refugees, from scattered families. Just to be able to look into these kids eyes, love on them, play with them, and see their faces light up gave me such joy. It was as though all the horrific things they saw were forgotten about for a moment and they were able to be kids. Giving them room to be themselves. Being with these kids, and visiting their families, and hearing their stories was amazing. Sometimes all people need is an ear to listen, to be told that their story and lives are valuable and important. That’s what we got to do with these kids while sharing Gods love in the process. 7. What is one of your favorite parts about the calling that God gave you?

God knows me so well. He knew the desires and gifts inside of me before I ever did. I always knew I wanted to work with people, help others and was not worried about getting my hands dirty. I sponsored overseas kids as a child, giving my allowance each month to help them. It was who God made me to be. Compassion is a gift He’s given me. But He knew where and when, and just the right timing. And He’s always faithful to follow through on the dreams and hopes that He’s placed inside of me. Even if it looks like I was going in the total opposite direction, He was faithful and knew what He was doing. And I still haven’t seen the fullness of it all yet. It’s not too bad to travel around the world going on God adventures either!

8. When you’re not out saving the world (lol), what do you like to do in your spare time?

I’m literally just an ordinary guy. I probably blend in with the crowd and really just live life like everyone else. I always have a job to try and support my own travels, and right now I’m working at a bakery. I love being outdoors with friends, and the occasional Netflix binge haha! I used to be in a break dance group, and I still love to dance when I can. But I just like doing everyday life with people, getting coffee, going to the park, having game nights, or going on spontaneous road trip adventures. Even as a grown adult, still one of my favorite things is to just have fun. Maybe that’s why I get along with kids so well!

9. What advice would you give to someone who thinks God is calling them to actively fight Human Trafficking? How should they go about it?

I’d say pray first, but start doing something. Really anything. If a ship isn’t moving, it can’t be steered. I started applying to every orphanage I could find when I first felt like kids were a part of my future. The doors kept shutting, but it didn’t stop me, and eventually led me to harvest school which led me to Cambodia which led me to connections which led me…you get the idea.

God can use any step forward.

Pray. The power of prayer is huge. In southern Thailand, our team had a powerful time of 24-hour prayer and worship in the red light district. The government turns its head to the trafficking that happens there. But about a week after that time, hundreds of women got rescued and raids were happening on the same street we prayed over.

Start locally. You’d be surprised how much human trafficking happens in our own back yard, and there are many organizations that are geared towards fighting it. They are always looking for volunteers.

Go. If you are called and know any details, I encourage you to start moving forward. Where God calls, He provides. He just asks us to follow. Provision will follow, and He is faithful to lead you.

Support others. Some people are called to support those who are able to go. I’ve been so blessed by these people, and it’s a way to participate and reap the benefits if you can’t actually do it yourself.

10. How can our readers get involved in supporting this mission?

I have been partnering with different ministries and organizations, but if you would like to sow into what I’m doing you can give to my Razoo page. The end of July I am going to Mozambique, South Africa, and Uganda. I have another trip to the Philippines with Wipe Every Tear, and may have a trip to India in between! You can give to me directly or donate to an online fundraiser for tax write off purposes.