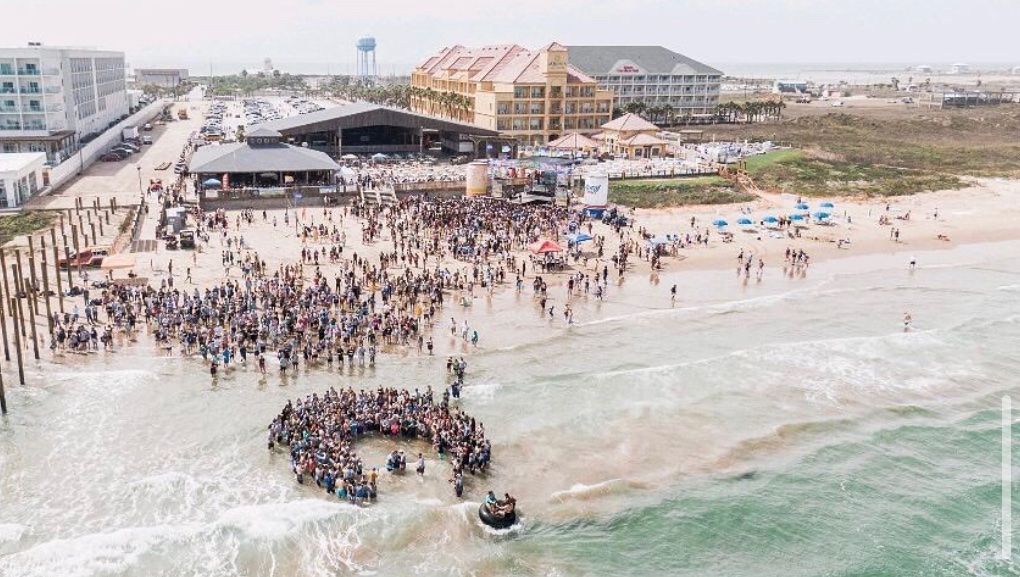 March 8th-14th I had the opportunity to go with the Tarleton State Baptist Student Ministry (BSM) to Beach Reach in South Padre Island, TX. Beach Reach is an annual mission trip where hundreds of Texas BSM students and staff head to “the island” during spring break to serve and share the gospel with the “spring breakers” who are there partying on the island. South Padre Island holds one of the biggest spring break bashes in the nation, so “beach reachers” have one of the biggest opportunities to share the gospel with students from all over the country. The main ways that students have the opportunity to share the gospel are through free van rides to and from parties and clubs, midnight pancakes, just walking around the beach or island “fishing” for spring breakers, and pancake breakfasts in the morning. My dad is the former TSU BSM director, so Beach Reach is something that I have literally dreamt of getting to attend since I was about 10 years old. While I’ve wanted to have to opportunity to serve at Beach Reach for so long, I truly had no idea the way that the Lord would absolutely wreck my heart while I was there.

Our team from TSU was split up into different vans for the week, and I was placed on Pir-Van-ah (each school has a theme and gets to come up with a punny name for their van!) along with nine other TSU students and leaders. Van rides take up the majority of our time and are where a large portion of our conversations take place. Most nights my van was scheduled to give rides to spring breakers from around 10 pm until any time between 2-4 am.

The first night we were giving rides I felt so defeated and anxious. This was my first time being completely surrounded by nonbelievers, many of which do not want anything to do with hearing the Gospel. Going to bed the first night I remember coming back to our room in tears questioning if I made the right decision to come. The next day, the Lord broke my heart for the lost time and time again. That afternoon a few people from my van went out to Clayton’s, the biggest party beach on the island, to try and have gospel conversations with the people there. After spending about an hour walking around trying to have conversations and being shot down and not having any gospel conversations, my partner and I took a few minutes just standing in the midst of the party chaos feeling completely defeated. Looking at the partiers my heart broke, but at that moment a girl named Chloe came up to me, grabbed my arm, and with tears in her eyes she said to us “Please tell me about your Jesus, I can’t live like this anymore.” For the next few minutes, I had the opportunity to share the gospel with Chloe and answer some of her questions, while her friends tried to pull her away from our conversation and she continually pushed them back. My partner and I were able to call our van to come to take Chloe back to her hotel so she could sober up, and we exchanged phone numbers so that we could meet the next morning for coffee and to continue our conversation.

That same night we picked up a guy named AJ from a bar to take him to another party. By God’s grace, he was the only guy on our van. One of our guys started a conversation with him, and we learned that he was raised in a home where his dad was a Christian and his mother was a Muslim. Our conversation with AJ lasted until nearly 5 am in a hotel parking lot. For 4 hours, AJ asked question after question about God, why we believed in him, and how he believes that the Bible and the Quran are the same, but have too many inconsistencies in both. During the conversation there were silent tears from people in our van with hearts breaking for how badly we could see that AJ wanted more, there was yelling from AJ questioning the character of God, and much more. For 4 hours, we passionately shared with AJ how loved he is, and how badly the Lord wants him. After praying with him, he got out of our van, and we never heard from him again. I think we sat in that parking lot for another 15 minutes, most of us crying, with hearts broken to know how deeply the Lord loves AJ & wants him even though AJ at that point did not want Him.

The next morning I was unable to get in touch with Chloe, but instead received a call from one of her friends that they couldn’t find Chloe. They had invited a guy into their room, and after her friend left to go get a drink, she came back and the guy and Chloe were gone. All-day and until late that evening no one could find Chloe. Around 9 pm she called me crying and asked if I could come to pick her up, and in the phone call she sobbed as she told me she had been drugged, raped, and questioned why God would let this happen to her. We were able to pick her up and took her to a safe place. Chloe and I texted and talked through the week, but I never saw her again. Since then, I have prayed for her every day.

The rest of the week we had multiple gospel conversations through van rides and pancake meals, and we saw so many lives change. Everyone’s favorite day of Beach Reach is the last day. In the afternoon every “Beach Reacher” gathers on Clayton’s beach, in the midst of the party, to baptize our new brothers and sisters in Christ. It was one of the most humbling and special things I have ever had the opportunity to be a part of and witness. My experience at Beach Reach completely changed the way that I see unbelievers, and completely broke my heart for what breaks His.

If you would like to see more of how our students prayed and what happened at Beach Reach 2020, you can go to Twitter and look up the hashtag #brspi20